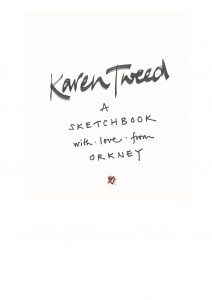 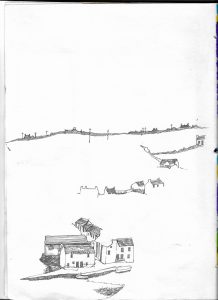 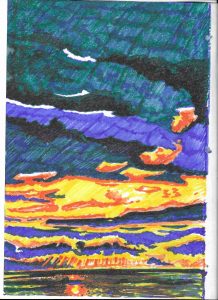 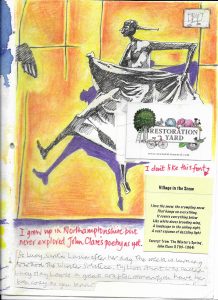 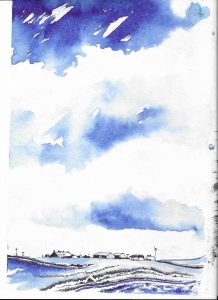 Karen moved to Orkney in January 2018. She first trained as a graphic artist in the early 1980s (before computer-aided design) in Leeds and has always held a passion for drawing/sketching, reading and textiles. She taught art in Bexhill-on-Sea, Sussex before being asked to join The Poozies (based in Edinburgh) and then The Kathyrn Tickell Band (based in Northumberland) – which switched her professional focus from art to music for 30 years.

During her art college days, she visited Shetland for the folk festival and returned many times to draw and play; Shetland sparked a love of islands and after moving (in 2012) to the Isle Of Wight, then to Ireland, she found that settling in Orkney rekindled the more solitary pursuit of her sketchbooks.

This is Karen’s first sketchbook publication – a personal memoire of the four months following her father’s death in November 2018 over 84 pages.

‘I realise that I deal with the mixture of grief, loss and love through music, reading and drawing. Each require much solitude and quiet – not that I feel I’m associated with those two things, yet they are more important to me, the older I become.
Dad was a great mentor and friend to me and while I was making this sketchbook into a publication, it became apparent that it was his and for him, as well as for me. I didn’t realise that at the time. I have over 30 sketchbooks now and this one was the obvious one to publish.
Time heals, it’s true and I feel that being in nature and observing beauty such as the skies, light and nature in Orkney is also a powerful healer.
I hope this publication inspires others to begin: write that story, song, poem, drawing that you have always wanted to, just for you. Magic happens if you allow it.’

Karen spent time drawing in Papa Westray, North Ronaldsay and South Ronaldsay; she is indebted to Pat Norquay, Ken Mitchell who were her sketch-pals on trips around the mainland and also to Linda and Alan Sharp (Papa Westray) and Alison and Kevin Woodbridge (North Ronaldsay) for their hospitality on her sketching trips both during and since the making of this book.

There are no reviews yet.