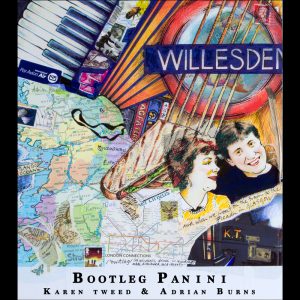 Available to download in high quality 320k MP3 format. The Mp3 album is 119mb to download so please be aware of this when ordering as you will most likely need a reasonably fast broadband connection to download in a timely manner!

‘Lunch? I have a better idea,” she replied, “Why don’t I ask Tom Nagle if I can borrow his box and I’m sure he’ll have a ghetto blaster. . . we’ll have the tunes down on a cassette in a jiffy. . .what d’you reckon?”

This music was originally recorded on a cassette C90 tape at Thomas Nagle’s family home in North London in about 2 hours c.1986.

The cassette then went around the UK, Ireland and beyond in a response to requests that I had received from several friends who wanted to learn what they regarded as my more ‘unusual’ session tunes. These were some of the tunes I had collected from everywhere over a period of 10 years.

Then, sometime in the mid 1990s, someone gave my Dad, Les Tweed, a copy of the cassette and asked him if he remembered it.

A few years later, Niall Keegan suggested that I put this out on CD during a conversation where I had told Niall that I’d been getting a lot of requests to record a more ‘traditional Irish-sounding’ CD.

At that time (the turn of this century), I felt I had nothing musically to say about Irish music, that hadn’t already been addressed by others.

A few years later, I suggested the idea to Adrian.

And finally, here we are.

This isn’t the most perfect recording – it was done quickly, for fun and on a cassette recorder. We haven’t taken out the mistakes or tried to smooth out the production.

It is what it is. A few musical hours, quite a long time ago, in the district where I was born. And it still makes me smile broadly.

. . .and Niall Keegan & Les Tweed who reminded us about all this in the first place. November 2015

Karen would like to dedicate this recording to the memory of Tom Conoboy and Gerry Hewitt with whom she shared so many years of great music in and around Northampton, England.