Karen Tweed started to play the piano accordion at the age of 11 under the guidance of Joe Coll, who came to Wellingborough, Northamptonshire to teach the accordion and also recruit players for his accordion band which was based in Corby.

She went on to study with Lawry Eady, Warren Eagle and finally with button accordionist John Whelan who was her biggest inspiration and fired her passion for Irish traditional music.

Karen turned professional in 1989, working with singer/songwriter Roger Wilson and then was a founder member of the Poozies.

Her playing is known for being mercurial, subtle, lyrical and expressive, and she regularly teaches on the BA and MA courses at the Irish World Academy of Music and Dance at Limerick University and at the BMus Degree in Folk and Traditional Music at Newcastle University. She has taught at Folkworks Summer School in Durham, Ashokan Northern Week, Darlington Music Weekend, Hovra Music Camp in Sweden, Musikkonservatoriet Odense and the Sibelius Academy in Helsinki.

She has played in the Kathryn Tickell Band and her many collaborations include the Anglo-Swedish quartet SWAP, her duet with guitarist Ian Carr, The Two Duos Quartet (with Andy Cutting, Chris Wood and Ian Carr). These led her to her 2001 collaboration with Finnish pianist/composer Timo Alakotila and their ensemble, May Monday.

Other collaborations have included Johnny Coppin, Paul Hutchinson, Thomas McElvogue. Nick Wiseman-Ellis, Karen Street, Naomi Frears (artist) and Paul Sivell (tree sculptor). She has toured village halls with Hell Said the Duchess (with Hannah James and Becky Price), The Chase, Nimbus and Beauty or the Beast?  Once in a blue moon she embarks on large scale projects such as her 21-piece all female, all singing, playing and dancing ‘Circa Compania’ or the No 1 Ladies Accordion Orchestra.  She’s also very happy performing solo.

She prefers ink pens to pcs and slippers to stilettos.

She is currently spending more time at home, developing her compositional skills and teaching by Skype. 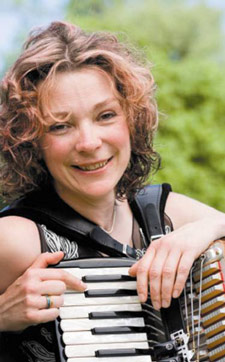 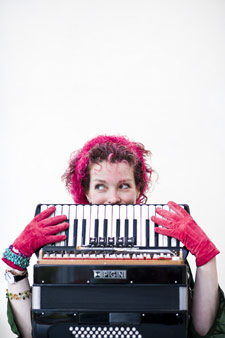